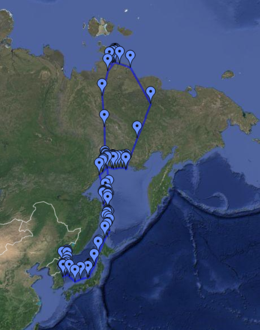 The Migration Itinerary of Vega Gull (Larus vegae)
Vega Gulls start their southbound migration on September to their summer habitat in Siberia, Russia. A total of 15 gulls were captured by cannon net at Samcheok, Gangwon Province, Korea and attached the WT-200 WildTrackers. During the spring migration, we lost contact with them when they had come to Siberia due to the rare mobile phone coverage in taiga and tundra region. When they had come to south region such as Sakhalin and Russian Far East, we could have received again their GPS location data including their activities at the Northern Arctic area.
<If you want to read more information, please click the link site.>