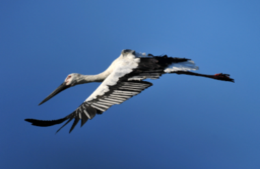 Korea goveronment started a restoration project of Oriental White Stork.  A total of 8 captive storks were released at Yesan, Chungnam Province on September 3, 2015. Resident storks were extinct in 1970's. After that only migratory storks are visiting Korea during the winter time.